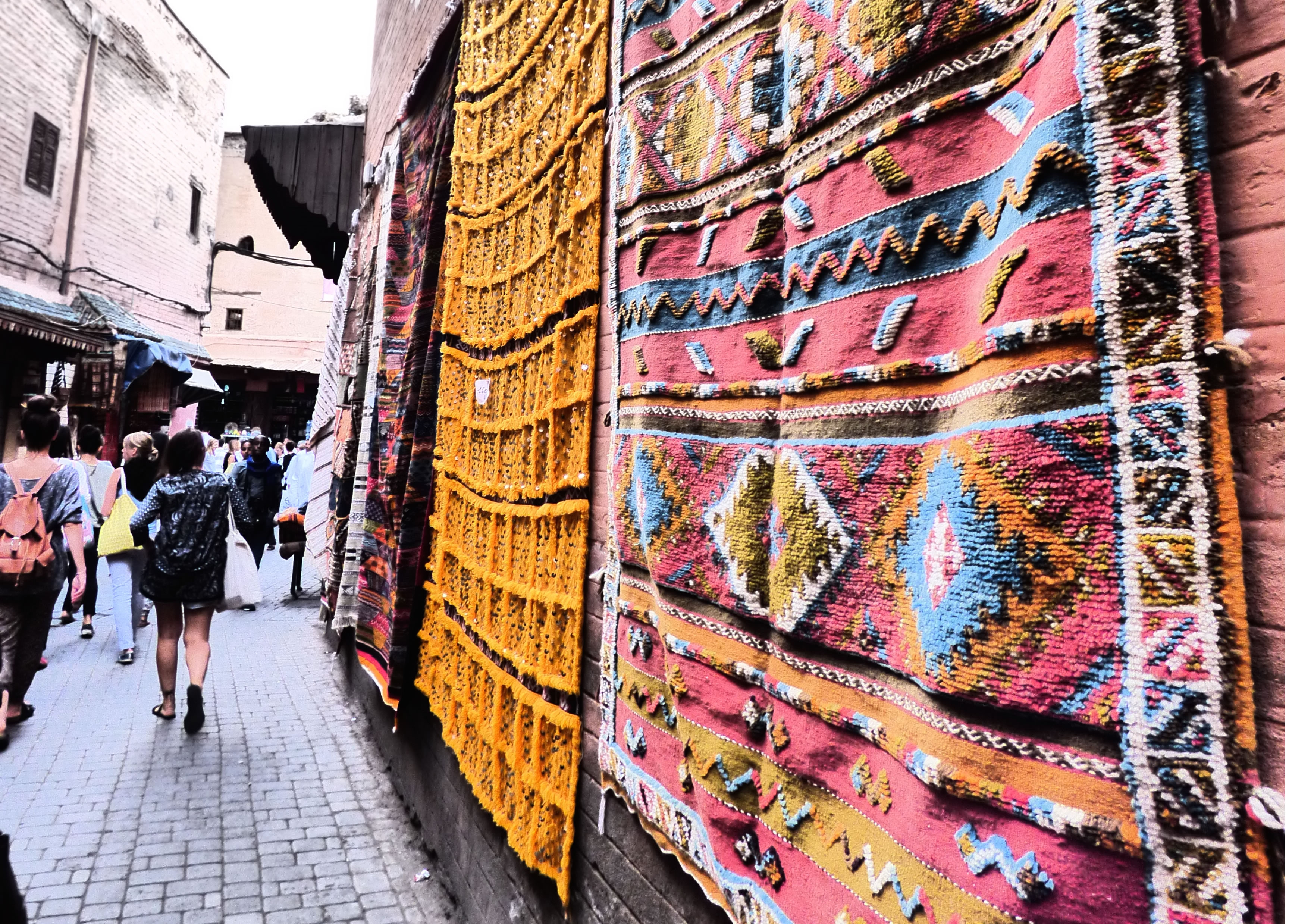 Posted at 10:37h in Travel writing by Leadbroker
0 Likes

Enchanted by the flush of crimson roses bordering the terminal, Marrakech already had me at “hello”–

Words and photographs by Hedi Lampert

We touched down at the charming Menara Marrakech airport in the glow of a sunset, casting a rosy, golden hue over the contemporary architecture, with traditionally referenced diamond shapes filtering light in lace-like patterns into the concourse. Enchanted by the flush of crimson roses bordering the terminal, Marrakech already had me at “hello”– pleasantly dazed as I was by my memories of James Michener’s ‘The Drifters’ and reveries of Crosby, Stills, Nash and Young’s ‘Marrakech Express’.

Driving down Boulevard El Yarmouk, motorbikes carrying unlikely groupings, from pairs of burka-clad women, to entire families of four, whizzed by. Soon we saw the legendary ochre-pink walls of the old city (medina), built in 1122-1123, earning Marrakech the moniker of “Red City.”

We reached the Bab Doukkala, one of the medina’s numerous gates, where we were disgorged from our minibus transport. A porter appeared as if from nowhere with a handcart, and having loaded our bags, set off at a clipping pace down the cobbled alleyway. Unwilling to lose him in the maze that is the medina, we trotted after him like a pair of clockwork mice dodging motorbikes, which alarmingly, did not slow down in the bustling alleyways, if anything, they seemed to accelerate. Winding through the medina, we passed by stalls selling leather bags, lanterns, jewellery and fruit, and each turn lead us into a darker, danker and frankly somewhat smellier alleyway. Pregnant cats huddled over scraps of food and tangles of kittens slept curled up in corners or wobbled unsteadily on brand new paws.

The rosy glow was beginning to pall when suddenly the porter came to a halt before a majestic, medieval, wooden, brass-studded door, and rang the bell. We waited in the gloom, and no sooner had the door opened, we were enveloped in an exquisite mist of fragrance. “It’s orange blossom,” announced Karine, our beaming hostess. “Welcome to Hotel Riad Idra.” Built around a courtyard or garden, a riad is a traditional Moroccan house or palace – Riad Idra is closer to the latter – lavishly tasteful, an oasis of white and blue tiled tranquility embraced by archways and alcoves and accented with mesmerising water features and byzantine flourishes – so beautiful, I almost wept.

A tray of mint tea and freshly baked Moroccan cookies appeared and Karine insisted we sit down and partake. She unfolded a map and pointed out the must-sees, best restaurants and what places and things to avoid. She also instructed us on how to haggle – essential know-how!

Our room was gorgeous and having showered and spritzed respectively with the complimentary Chanel no. 19 and Allure Homme, thoughtfully placed in the luxurious bathroom, we headed out in search of the Jemma El Fna, the medina’s main square – and apparently Africa’s busiest. As we walked, we made sure to pin down landmarks so as not to get lost on the way home. “Remember that carpet seller,” “and this wood-carving workshop.” Soon, however, the vendor-filled alleyways gave way to the souk (traditional Berber marketplace) and one purveyor and his goods became virtually indistinguishable from the next; we found ourselves in the midst of a colossal hub, teeming with tourists and locals alike, vendors shouting above the general din and the growl of those ubiquitous motorbikes.

The night was warm and thick with the delicious aroma of grilling meat emanating from a bank of food stalls in the middle of the square, while on the outskirts, barrows heaved with mountains of dried figs, dates and nuts, and freshly squeezed orange juice sellers abounded. Drawn to the sound of drums, we joined a crowd, rocking and shaking their shoulders to the rhythm. Within seconds, a tin was being rattled under our noses; everything has a price in Marrakesh. There were circles everywhere – around storytellers enacting dramas or snake charmers. An intermittent breeze carried the stench of donkey urine –yet this only added to the wildly sensual collision. It was exhilarating, wondrous and utterly intoxicating! And then it got better – we started shopping!

Kilim and leather bags, belts, sandals and slippers, silky harem pants, turquoise, and amber silver jewellery, spices and, I’d love to add carpets, but I ran out of suitcase space. The thrill of the haggle, however, is in a word, addictive. Chivvied on by the adrenalin rush of your last conquest, having knocked 50 percent off the original price, you cannot resist, but try out your newly honed chutzpah in the next emporium of treasures. “You are a difficult woman,” was high praise indeed from the vendor who reluctantly sold me a couple of pashminas at 40 percent of the original quoted price.

On the way back to the hotel, like the legendary crumbs sprinkled by Hansel and Gretel, our landmarks along with their vendors had disappeared. One wrong turn led to another and another and eventually, we succumbed to the relentless offers of assistance from a “tween” boy. The child led us on an exceedingly winding and increasingly nerve-wracking path back to our hotel and when we tipped him 20 Moroccan Dirham, he looked horrified and demanded 100. We refused and he declared that we were “bad people” – he all but spat. And indeed we did feel bad until our concierge assured us that we had in fact overpaid the young chancer.

Breakfast the next morning was a sumptuous affair; freshly squeezed orange juice, yoghurt, pastries, toast, delicate goat’s cheese, homemade jams and coffee. We languished on the roof terrace among bougainvillea and the ecstatic chirping of birds. The Imam’s call to prayer drifted across the rooftops.

The day beckoned with a visit to the spice bazaar and the Jardin Majorelle, a botanical garden neighbouring Yves Saint Laurent’s residence. The designer adored Marrakech and spent his final years there.

A glorious full body massage at the hotel spa was a marvelous end to a day spent marching the cobbled alleyways and indulging in more serious haggling.

All too soon our stay was over, but having left a small piece of my heart in Marrakech, I returned home with an imprint of the Red City in that vacated space. I’m definitely going back – if for nothing else but that carpet!