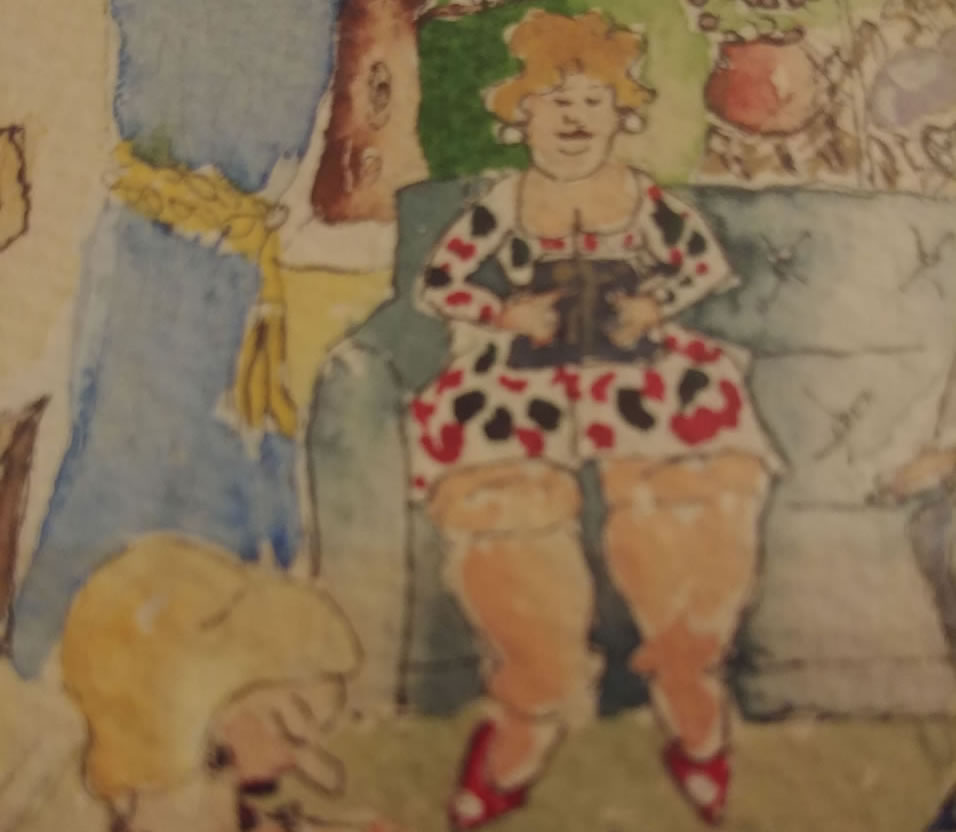 Posted at 11:28h in Fiction by Leadbroker
0 Likes

A short story by Hedi Lampert

It was a time of famine for Concita – bells no longer tinkled with the promise of tea along with the bounty of DeLuga’s Bakery. Yet the buttery taste of crumbling pastry, melting, was still on her tongue and oh those honeyed nuts and the blessing of cinnamon.

Now, only yesterday’s ciabatta, crusty, hard and a little too chewy, its fresh yeast smell already altered by a suspicion of mildew.
Yes, no bells, not even the telephone. And the gramophone was silent too – gathering dust like a dead moth. Such a time of beigeness.
Concita’s ankles swelled like rising dough – white and puffy. If she prodded the turgid skin with her finger, a dent remained, whiter than the pale surrounding skin.

Concita longed to dance again, but as long as the men were fighting, there would be no partners, and the city would remain under curfew. No one could enter and no one could leave. Fresh produce from the bountiful farms on the outskirts was left to rot. Truckloads of shiny, plump scarlet tomatoes lay fermenting in the late summer sun. Rats gloried and multiplied in the wheat stacks, already harvested and shucked, now gathering mould. Hundreds of chickens roamed wild while hatchlings emerged daily from uncollected eggs.

But still, the fighting continued. Concita’s sons and Miguel, her fourth husband, were far away on the frontier. For six weeks, there had been no word.
“Ai,’’ groaned Concita, as she dipped the hard crust of ciabbatta into some tepid briny broth. She drew the curtains and lit her last candle. Tomorrow, she would have to swap the little porcelain figurine of the Dalmatian for some new candles.

Her head itched underneath the pins which clasped her dark, wiry hair into a bouffant chignon. She scratched at her scalp and a shower of white flakes peppered her shoulders and the back of the arm chair. Concita examined her nails, scraping out the bits of skin from under the nails on her left hand with the nails on her right. “Okay, so maybe I should paint the nails,’’ she said aloud. Even her own voice was a little shocking and unfamiliar in the silence. She padded slowly to her bedroom and opened her dressing table drawer. It released a hazy little cloud of dust which smelt of face powder and mothballs. Concita coughed and waved the dust away from her face, screwing up her nose and narrowing her eyes. She pushed aside, old mascara wands and stumps of lipstick which lay lidless, and finally plucked out a little bottle of blood red nail polish. “Si, “Lady of the night,’’’’ she read from the label. She unscrewed the lid and removed the brush from the bottle and slowly, painstakingly began to paint her left fingernails holding the brush between her right thumb and forefinger. But the nail polish was thick and lumpy and it streaked and clumped on her yellowing, ridged nails. “Ai, even this now,’’ she sighed and began once again to scratch in the drawer of her dressing table for cotton wool and acetone.

Concita could not find any cotton wool, so she was torn between leaving the awful streaked nail polish on her nails or cutting up a sanitary towel to do the job. She looked down at the nails once more and tightened her full lips into a thin straight line. Then she spun around and marched to her bathroom cabinet, found her pack of Kotex and began snipping a pad into mosaic sized squares.

“Allora, the periods are not here every month anymore, anyway.’’ she mumbled, and shifted her fleshy breasts slightly to fit back into her bra.
Suddenly, the silence was splintered by children’s voices, high and piping, and then a man’s voice. “A man,’’ thought Concita as she rushed to the window. Drawing the curtains back, she peered out onto the square and there was Guillermo with his wife Maralisa and a group of children, all shouting at once, “The war is over, the fighting is finished. Peace, peace, the war is over!’’

“Oh, oh,’’ shouted Concita, and she spun away from the window, and ran back into her bedroom where she plucked a faded red and dry lipstick from her dressing table drawer. She dragged it over her lips, smacking them together and then penciled her eyebrows into two rather high arches which gave her an air of being slightly surprised. With the same pencil, she drew black lines all around her now sparkling brown eyes. She dabbed some 4711 Cologne behind her ears and in between her breasts and then she pulled off her housecoat, dropped it where she stood, and from her chestnut wardrobe, she selected a crimson and gold kaftan. The last time she’d worn it, it had clung to her curves and General Francobollo had pinched her on the bottom.

Concita was amazed at how large the kaftan was for her now. Weeks of stale ciabatta and consommé had whittled her buxom 120 kilogram frame down to a mere 100 kilograms. At 4 foot 11, she felt positively svelte. She looked out of the window again and smelt the fresh sweetness of lilies followed by a deeper, darker base note – something a little decadent and maybe even voluptuous. Down on the sidewalk, a flower seller was setting out his blooms in plastic buckets and rusty old pickle cucumber tins.

Concita swung around and made for the gramophone. She selected a tango and placed the needle on the record. Holding her arms out in front of her, curving her left arm around an imaginary partner, Concita strutted, swayed and dipped. Now there was the promise of more than just tea parties. The men were returning. But Miguel would have to watch out, Concita wanted to dance with all the men, each and every young corporal. After all, she needed to congratulate each man in person. Who knows? Maybe it was time for a fifth husband.

With the tango still swirling around in her head, Concita ran across the square, armed with a basket of porcelain figurines. By the time she reached DeLuga’s, her armpits were wet and her thighs were chafing. The fires were stoked and the ovens were hot and the sweet, warm, fragrance of rising yeast and cinnamon was like a blessing.